“Wake up, Kate,” he said. “Come on. Wake up! It’s foggy and the radar went out. Shipwrecked on the beach is the last thing I need right now.”

Kate felt herself being shaken. In her nightmare, she fought her way through sea water to a locked engine room hatch. She flailed away, windmill style, and clipped Karl on his right ear as he shook her awake.

In pea-soup fog with no radar, Karl ran the Galatea at slow speed while he coordinated satellite tracking with the sea chart unrolled on the galley table. Satellite calculation alone was not precise enough to guarantee safe passage through the difficult harbor entrance. Tension rose in the wheelhouse. With no visibility for dead reckoning, it took several passes to locate the whistle buoy about a mile and a half west of the harbor opening. Karl heard it before he spotted it. Like magic, the buoy loomed out of the fog some fifty feet away. Consulting the sea chart, Karl coordinated vessel direction with compass heading and pointed the boat toward the harbor.

Kate leaned over the galley table to plot their progress by comparing fathometer readings with chart markings. She hoped the ocean floor beneath them remained the same since the chart was printed some years earlier. The Union Bay jetties, two manmade structures extending seaward from the mouth of the harbor, were her target. Her course would have to be as precise as threading a needle, complicated by an inability to see the needle. If the vessel sailed close to the jetties, but a little to the north or south of the pair, the push of the seas and current would be strong enough to override every effort to keep the Galatea off the beach. She would share the fate of other vessels whose captains misread a chart or paid little heed to the reputation of the bay for being difficult to find, and once found, tricky to enter even on the best days.

“Kate, go up in the bow and look for the jetties. Take your sunglasses. They might help cut through the fog.”

Bundled up in her padded waterproof parka, Kate picked her way forward along the port side of the wheelhouse. She knelt beside the galvanized housing over the anchor winch and hunkered down to get as much of her body as possible into the lee of the bulwarks. For balance, she held onto the heavy chain stretched between the winch and the weighty anchor snugged tight to the bow. For the next half hour, with glasses on, then off, then on again, she stared into the fog and willed it to thin enough for her to see something recognizable on shore.

Desperate to see land, her eyes and brain worked together to manufacture false outlines of jetties and cause them to loom up out of the fog. Several times she gasped in excitement, and keeping her eye on the land mass, she began to wave and point toward the land. Then as suddenly as they appeared, the unreal shapes shimmered like the mirages they were and faded into the mist.

Then out of the heavy fog, something real emerged. Used to being fooled, Kate at first didn’t believe the sight, but when it didn’t vanish, she tapped on the wheelhouse window. One-by-one, a group of six small pleasure boats materialized from the mist, and formed a tight swarm near the Galatea. The group of boats, each under twenty feet in length, and not one equipped with radar, also searched for the jetties. Karl reduced Galatea’s speed to a mere crawl to keep from swamping the smaller boats and inched her forward.

The first captain to notice the larger vessel shouted to his nearest fellow captain. Waving his arms and gesturing, he pointed at the radar housing mounted in the rigging high above the Galatea’s wheelhouse. One by one the small boats fell into line just off the larger vessel’s stern. The ensuing parade resembled a huge mother duck followed by her baby ducklings.

As Karl watched them, he realized the operators of the small boats believed his radar worked. Horrified, he knew they would follow him wherever he went, even to the beach, believing all the while his radar showed a clear path into the harbor. He stood in the open doorway and got the attention of the nearest boat’s operator. He gestured toward the radar then waved his arms in a frantic pantomime about the nonworking electronic device. The man on the boat closest to the Galatea and a couple of others close behind him stuck their hands and arms out of windows and gave Karl enthusiastic thumbs up. Shaking his head, he tried again to get his urgent message across, and again he got the same positive feedback from his followers.

Frustrated and responsible, Karl strode aft and stepped up six inches onto the fishing cockpit hatch cover. He shifted his position and jabbed his right forefinger several times in the direction of the radar. Savagely, he drew the edge of his open hand across his neck while he tilted his head to one side and hung his tongue out in a pantomime of cutting his own throat.

At last the small boat captains understood his desperate message. Quicker than they appeared, the six boats fell out of line and vanished again into the fog. After they disappeared out of sight, it was difficult to believe they were ever there. Karl was left to hit the beach on his own.

Slow-by-slow in a northeast direction, Karl steered the Galatea back on course. Before another half hour passed, Kate spotted the north jetty and went back into the wheelhouse.

“We’re too far north of the entrance,” Karl said. “And we’re too close to shore! We’re headed straight toward the resting place of at least a dozen sunken boats.”

With his heart pounding his racing pulse, Karl swung the wheel hard to port to head away from the shore. He shoved the throttle lever full forward. The great diesel roared its protest.

The current and the seas continued to push on the beam of the vessel. Each surge edged her a little closer to the beach. The few minutes it took for Galatea to make scant headway seemed like hours. The powerful engine thundered against the push toward shore, and at last Galatea gained enough speed to break free of the menace and glide westward toward the open sea.

By the time his racing pulse settled to a near normal rate, a misty south jetty came into view. At last, the Galatea reached the invisible line for safe ingress through the jaws. Karl guided his boat on a course he knew well, and in a short while, the boat entered the safe harbor of Union Bay. Relaxed enough to plan his upcoming repair work, Karl reminded himself to test the radar on a clear day. 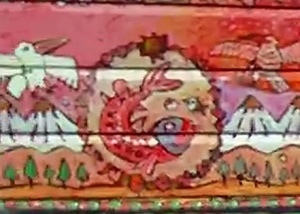 Recent Additions to the Site

You are Cordially Invited to Follow “Birds of a Feather”

May be of interest...